The Bottom Line─ The Mazda MX5 Miata has always been the modern equivalent of the classic British sports car. With an available retractable hardtop for 2007, it now becomes even better. It has its flaws, but any true sports car lover can overlook these and enjoy the moment.

I became a car nut because of a low-powered British sports car, an MGA. I almost gave up on cars because of the same car, because it was unreliable, ridiculously quirky, and simply not made for American driving.

The MGA died, as did MG, essentially. But Mazda launched the Miata in 1990, and this car is good where the MGA was not good (it still hurts to say bad), and offers just as much driving fun, if not more. The MX5 Miata, like the MGA, is underpowered, but you hardly notice it because of the fun you’re having.

Mazda redesigned the MX5 Miata in 2006, for its third reiteration. It didn’t share any components with the car it replaced. And yet, its the same car it was when it was first introduced. This is what Mazda discovered that British Leyland Motors didn’t; upgrading a car without changing its basic character is good.

First, the engine. Powering the Miata is a 2.0-liter inline four. It drives the rear wheels through a 6-speed automatic transmission (in the Grand Touring model) with a manual mode. So if you want to be lazy, you can keep the gear selector lever in full automatic mode and the Miata shifts when it feels its the right time to shift.

But if you want to drive the Miata like a sports car, and I found I wanted to drive the Miata this way, then shift the lever into M and shift using paddles located behind the steering wheel. There are clearly marked upshift and downshift paddles on both sides of the wheel, so you don’t have to decide which ones you want to use. They shift instantaneously, and since there’s no clutch pedal to mess up, the shifts are smooth.

In the week I had the Miata I don’t believe I exceeded 60 mph on any road. But boy did I have fun. And that’s the essence of a true sports car as far as I’m concerned. The engine/transmission combination is so well balanced that speed isn’t important.

Obviously, the other half of the sports car equation is great handling, and the Miata passes this test with flying colors as well. We drove the Miata over our favorite twisting mountain road, upshifting and downshifting with the paddles and taking the corners as fast as we dared.

I would love to take the Miata out on a race track or slalom course somewhere where I could do what I wanted without the fear of running into a car coming the other way.

This all-new third-generation MX5 Miata has a new front suspension that is comprised of double wishbones, as in the best sports and race cars. The rear suspension uses long links to help linearity. Coil springs are used all around with gas-filled shock absorbers. Steering is by rack-and-pinion (power-assisted) and there are disc brakes at all four corners.

Aiding in the handling is the front mid-ship engine location. This means that it is pushed way back in the engine bay, which contributes to nearly ideal 50-50 front-to-rear weight distribution, leading to better balance and – ta da – be better handling.

Instruments were white-on-black, as in classic sports cars. They included a speedometer, tachometer, oil pressure, water temperature and fuel.

To make the passenger compartment as roomy as possible, there are power windows and mirrors. No modern car is without cup holders, and the Miata has them in the doors as well as in the center console.

When I drove a soft top Miata last year, I was impressed with the headroom with the soft top up. There was never the feeling that I was going to touch the roof. The soft top was manually operated, but once you get the hang of how it worked, it raised and lowered fairly easily- a lot easier than my MGs top did. The top folds neatly into its own boot, that doesn’t reduce trunk space. When it’s up, you can use the boot for additional storage.

This year, Mazda adds a Power Retractable Hard Top (PRHT) to the Miatas list of options. The PRHT disappears on cue, folding into the trunk when the open button is pressed. The PRHT also uses no trunk space.

The PRHT consists of three parts – a front section, a middle section, and the rear window – which hinge and move to nest atop one another in exactly the same space as the soft top. Windows automatically lower several inches when the open button is pressed. Opening and closing cycles last 12 seconds, making it the fastest power-operated retractable hardtop in the U.S.

The Mazda MX5 Miata Grand touring lives up to its name. The Miata has always been a good sports car. The original concept was excellent, and the redesign of the third generation keeps the tradition alive. The addition of the PRHT doesn’t interfere with the cars design and simply adds practicality. If you’re a fan of big honking power and noisy exhaust notes, this isn’t the car for you. But if you’re interested in seeing and experiencing what the classic sports cars of the Fifties were like (or would have been like with a bit of civilization), then this is the car for you.

But be careful, you may turn into a car nut.

The week that we had the Mazda MX5 Retractable Hard Top treated us to fabulous weather, so needless to say, the top was down most of the time.  This little car was simply a blast to drive and my wife and I took every opportunity to use it. This MX5 is as refined a sports car as you are likely to find anywhere near this price range.  We expected a typical sports car-like choppy ride, but were pleasantly surprised by how well it took to the broken pavement in our neck of the woods.  I found acceleration from the 2 liter 4 cylinder engine to be more than enough for anything I asked of it. 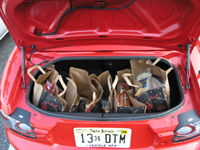 On our way home one day, my wife and I decided to go grocery shopping.  After we finished with the checkout, we looked at the 5 large grocery bags in our shopping cart, then looked at each other and both realized at the same time which car we had.  My wife wondered how many bags she would have to place on her lap.  Well, guess what, the trunk in our red rocket swallowed all the bags with room to spare for another bag or two.  This is one of the only retractable hard tops that I know of where the top does not use any trunk space when down.

(Partial List, depends on model, some options are only available as part of a package, see your Mazda dealer for details)

In the Garage with CarParts.com is an online blog dedicated to bringing DIYers and devoted car enthusiasts up to date with topical automotive news and lifestyle content. Our writers live and breathe automotive, taking the guess work out of car repairs with how-to content that helps owners get back on the road and keep driving.

As the world tries to contain the spread of the coronavirus that's been causing plant shutdowns in hardest-hit China, as well as South Korea and Europe, automakers in the United...Read more

A Guide to Car Window Accessories

Car window accessories like a windshield sun shade can help protect your vehicle’s interior and your eyes from the potentially adverse effects of intense sunlight. They can make getting into...Read more

2020 is shaping up to be a great year for Ford and its loyal customers with the pending arrival of the 2021 Ford F-150 pickup truck, the all-new Bronco, the...Read more

General Motors is facing a conundrum with its 2019 pickup trucks having poorly functioning software that prompted a recall from the automaker. About 900 customers who have complained of brake...Read more

The Chevrolet Equinox continues to follow the footsteps of its corporate sibling, the Silverado, showing strong sales performance with 30% of General Motors' small- to mid-size SUVs and second to...Read more

The current generation of the Hyundai Santa Fe was only introduced for the 2019 model year, but the company is not holding back from riding the SUV's popularity by giving...Read more

Copyright © 2020 In the Garage with CarParts.com

Search In the Garage